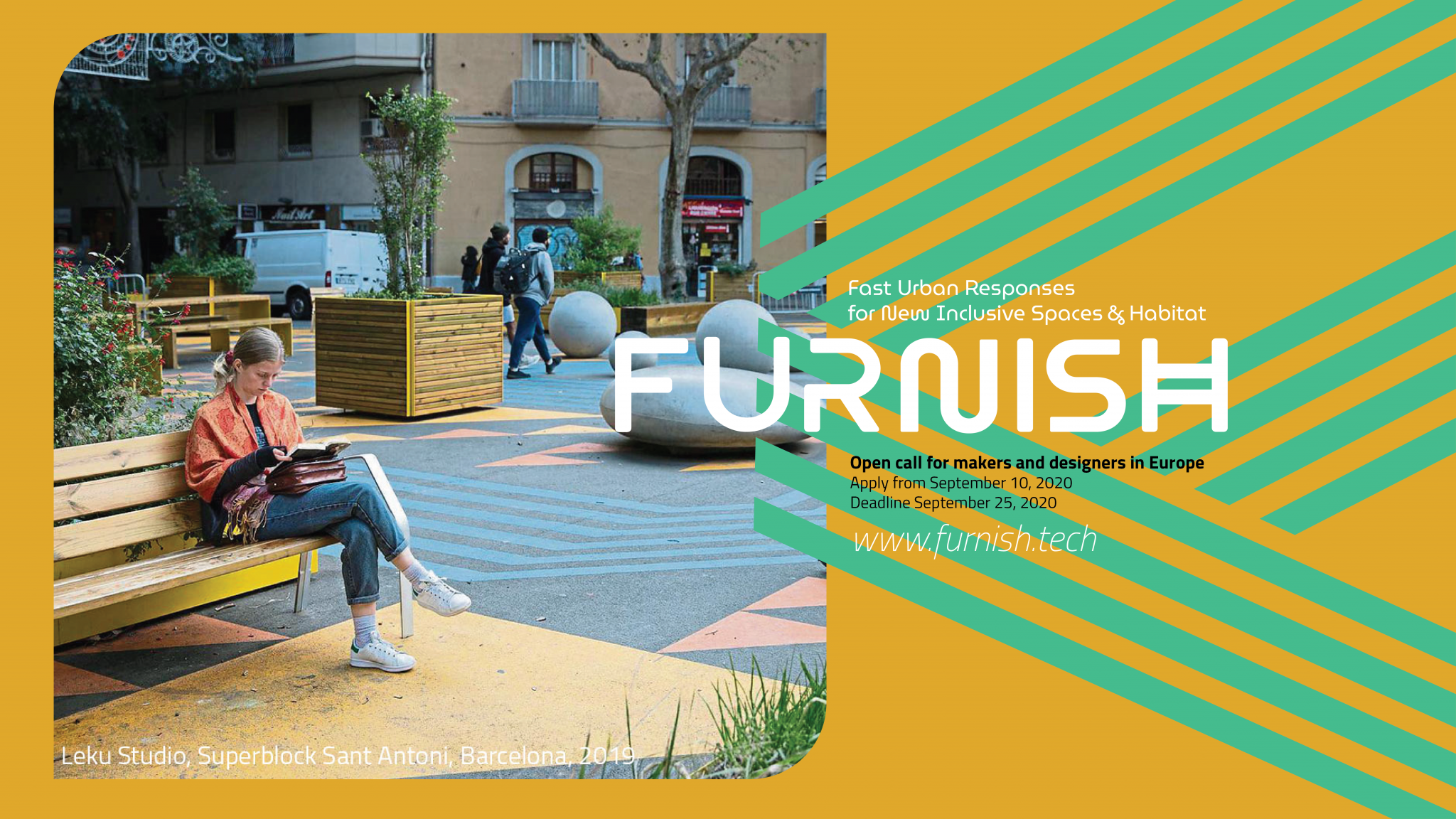 In the current times, where cities are facing new mobility restrictions, ensuring social distancing is still an issue for the majority of countries to avoid a larger spread of COVID-19. In this context, the teams participating in the FURNISH project, have deployed their designs onto the streets of their cities with the goal of mitigating the spread of the COVID-19 pandemic.

A total of 23 teams applied to the open call, which resulted in 4 winning teams from different European countries. During the past months, they have been working jointly with the consortium members through mentoring and virtual workshops, which has involved more than 70 professionals, to design unique temporary urban elements. The 7 teams (4 selected through the open call and 3 headed by the FURNISH design partners) have now reached the last stage of the process and have already tested their creations on the streets of their respective cities.

The contexts where these prototypes have been tested are cultural, educational, recreational and commercial activities that take place in public space. In these situations, new spaces need to be gained, often in a temporary way. FURNISH proposals help expand public space in areas temporarily cut off from circulation.

The seven prototypes, placed in five different European cities, have been tested by more than 300 people through “living labs”, as the end-users of these designs have intervened in the evaluation of the pieces, fabricated digitally in FabLabs. The cities where these tests are taking place are: Espoo (Finland), Barcelona (Spain), Budapest (Hungary), Guimarães (Portugal), and Milan (Italy).

The prototypes created are:

AEIOU intends to generate new ways of expressing a traditional event, by means of an interaction that keeps social distancing but simultaneously reaches the greatest number of people, spreading the positive feeling that is present in such a traditional celebration.

BP Gang is a Courtyard transformation project in a downtown urban block in Budapest. It is an installation of digitally fabricated sets of furniture and graphics. It aims to foster the stimulus for more interaction between users through art, music, theatre, and new daily rituals while maintaining social distancing measures daily.

Konch is a multipurpose object enabling discussion or relaxation in the COVID-19 situation. It is a comfortable seat with an integrated audio system. This way one can keep the social distance recommendations and still have a vivid, organic, screen-less conversation, as a balance to the recently so popular video chats. Konches can be easily arranged in any constellation up to 100 meters apart, which is the area covered by the integrated router.

MUE:SLI (Mobile Urban Element: Sport, Leisure and Inclusion) is the name of the digital fabrication project developed by the UNPark team of the Politecnico di Milano and Ideas – Bit Factory, the first Fab lab of the Monza Brianza province, for the European Call FURNISH (EIT Urban Mobility).

Under the conditions derived from the COVID-19 Pandemic and the protocols for the use of spaces and physical distancing, we will focus on experimenting with urban relations and synergies, focusing on educational spaces. Based on the strategic location of an ephemeral and itinerant architectural device, it is intended to allow continuous learning and experimentation on the use and appropriation of urban space by citizens.

Vora is a temporary infrastructure conceived to intensify and multiply the use of recently gained pedestrian spaces around school accesses in Barcelona city centre, consolidating the temporary public spaces that have occupied streets in response to the COVID-19 crisis. VORA is a safe and thick limit that promotes space appropriation though spontaneous game, outdoor academic activities and creative industries actions.

Open Terrace is a modular, adaptable system of rapidly deployable and reusable urban elements for reclaiming vehicular space for human use. The system comprises wooden platforms which elevate street areas to the same level as pedestrian zones, and massive wooden curb which act as safety barriers between people and vehicles and are also capable of serving as foundations for a wide range of plug-in furniture elements.

Learn more about the project here.