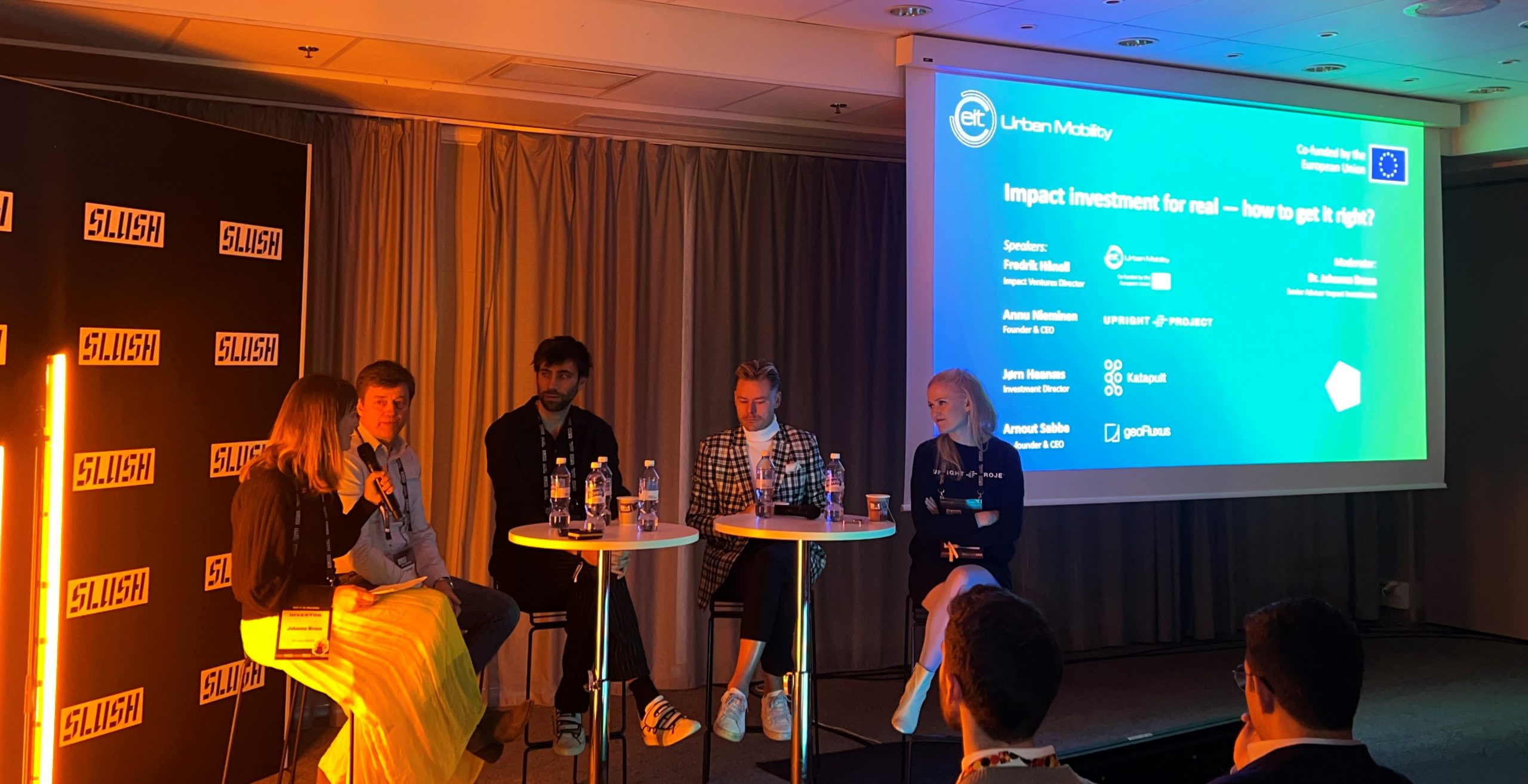 Saying you want to become the leading impact investor in Europe in the mobility sector is one thing, proving it another. How do you define impact, and how do you measure it? Together with the Upright Project, Katapult and geoFluxus, EIT Urban Mobility has discussed this topic during a panel session at Slush 2022.

The definition of impact

The session kicks off with the so-called elephant in the room question “What is impact?”. While the answer often is “it depends”, Annu Nieminen, CEO of the Upright Project, is clear “It does not depend at all. We have huge amounts of science on this topic. It is an area where proper mathematics, logic and rigorous thinking has taken place for a clear definition”. Impact is not only the negative or positive effect on the environment, but also on economic, health and knowledge that are all measurable.

Therefore, impact shouldn’t be based on personal opinions or stories. Annu: You wouldn’t take a financial story as the truth, you want data, so why take an impact story as such?”. Fredrik Hånell, Impact Venture Director at EIT Urban Mobility, continues: “When you meet an entrepreneur as an investor and you have to ask them about the impact they create, they tend to have a nice story prepared for that.  Others start by mentioning what they dream of and the change they want to achieve: All other aspects of the business have almost become secondary. The big problem we are facing is that we are often presented with a good story which doesn’t mean they also create real positive impact.”

Even though impact should be based on data, this is not easy with early-stage companies. Jørn Haanæs, Investment Director at Katapult: “With late-stage companies you can make clear predictions, but with pre-seed companies it is still guessing on the impact. Either way, the most important question remains: can a company go from zero to one, will it work?”.  When a company is not arriving at positive financial results at some point, there won’t be any other positive impact at all.

Adding to this perspective from a different angle, Arnout Sabbe, CEO of geoFluxus states: “I believe that the most sustainable outcome of your company should also be the most positive business outcome. If this isn’t the case and sustainability hinders your financial returns, then it is time to tweak your business model since there is something wrong with the DNA of your company.”

Over the last years, the importance of impact has increased significantly. “Companies start to understand that they can’t solarpanel their way out of the impact question anymore. They need to change for real and become more transparent”, says Annu. Unfortunately, at the same time there is also a rise in so-called greenwashing. Arnout: “It’s not only large companies who pretend to be green, but there also exist labeling companies which you can just pay to receive a green label. What is then the value of having such a label?”

Annu: “When we review webpages, the more we come across the word sustainability, the less impactful these companies actually are. So don’t say you are sustainable, do it and be the best at it.” This is something Arnout fully confirms: “geoFluxus has shifted its narrative from saying that it is the most sustainable way handle your waste to the easiest and quickest way. We don’t say sustainable anymore, even though the algorithm still works in the same way.”

As a result, the company now sees that also companies that are not interested in sustainability or the ones who don’t want talk about it, are onboarding their platform. “We don’t look like a hippy-washed company, it’s basically something that makes waste easier to handle and by coincidence it’s also the most sustainable solution for rest materials.” So instead of talking a lot about sustainability, simply integrating it at the core of your business works a lot better.

The future of investing in impact startups

Looking at the next decade, Jørn states that investing in impactful startups is the best thing as it also leads to superior financial results. “I think that impact ventures will only scale if we make it also the most profitable. We have investors in our fund that don’t care much about impact, so they get that as an extra and they can stay for the financial performance. You don’t need to only focus on impact and get stigmatized for it.”

During this time period, Fredrik is foreseeing a change in the investment focus from software applications to hardware solutions. “While hardware will always have a negative impact due to the resources needed, they will enable technologies and solutions which will lead to a net positive impact. This implies for me that our investment thesis and the way we evaluate startups will have to change since evaluating a deep-tech startup is quite a different deal than evaluating a software company which often are seen as positively impacting.”

Annu: “Don’t forget that also apps have an impact. They use energy, mobile devices and talented people. Especially looking at human capital, resources are now used for many not-so-necessary services and products like apps where cats make funny faces. We need to consider the opportunity cost of highly educated people which is also a limited resource. How much can we afford to use on secondary important things?”

Accelerating the change to impact

Climate change has been seen as something of the future, something that our grandchildren will have to witness. However, it is already happening today. Annu: “The planet doesn’t have the time to make it complicated. It doesn’t have 20 years left. As such, startups should not be filling in questionnaires about ESGs for investors. Running a company is hard enough and founders should focus on building a net positive business.”

“Well, besides specific investments, we need policy changes with big issues to incentivize good behavior”, states Jorn. “Specially to deal with the emotional side of human nature.”

So how do we get people to change? Jørn: “Don’t ask the people. For example, if you ask most people, they want a Tesla. Even though there are a million times more efficient ways to move people around both in cities as in rural areas. The whole point should be to let innovators do their thing and finance new projects and new experiments and then see what works.”

Fredrik: “I would actually recommend getting rid of cars completely and having more bicycles. By reshaping cities like Barcelona with superblocks and low speed areas, we give the cities back to the citizens.”

Arnout adds a different point of view: “I would say we need more crises. We see that only real things and systems will change after extreme disruptions. For example, with our company we now see that suddenly companies, instead of having to pay for their waste, get money for their waste materials due to the gas crisis and material shortage. This has never happened before and makes them treat waste differently.”

Annu: “I believe that change will come slowly but surely now that it is becoming financially more profitable to run and own a company that creates more value for its surrounding world. Due to where talent wants to work, where investments want to go, what do founders really want to run. And I see this change already happening, so many cool things are accelerating and that is what I’m betting on.”